Fed Biz Sold to Stand at Highfield in Alberta – BloodHorse

Fed Biz Sold to Stand at Highfield in Alberta – BloodHorse 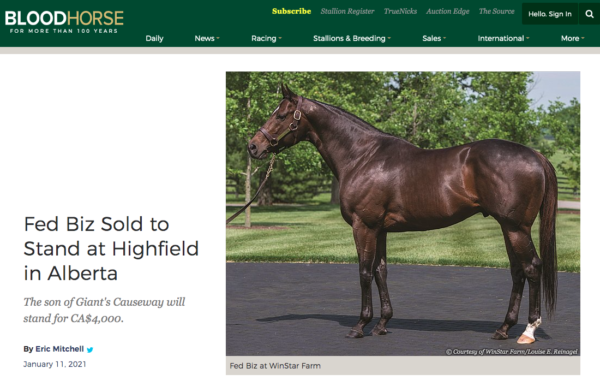 “Fed Biz was an incredibly talented racehorse and with his outstanding pedigree and stunning looks we are thrilled to welcome him to Alberta,” said Adrian Munro, president of Highfield. “This is the right time for a stallion of his caliber to be introduced to the Western Canadian market. We think Alberta is poised for growth, and the team at Highfield looks forward to Fed Biz joining Cape Canaveral  at the farm.”

While standing previously at WinStar Farm in Kentucky, Feb Biz was the co-leading North American second-crop sire of 2019 by number of black-type winners with five alongside Cairo Prince  and Souper Speedy  and was the leading second-crop sire by number of black-type performers (13). He’s sired nine black-type winners so far, led by graded stakes winner Inthemidstofbiz, who won last year’s Thoroughbred Club of America Stakes (G2) at Keeneland by three lengths.

“We wish Fed Biz and Highfield Stock Farm the best of success in Western Canada. He has gotten runners on all surfaces and distances and he is so well-bred. I see him being a top stallion in that region for years to come,” said Elliott Walden, president, CEO, and racing manager for WinStar.